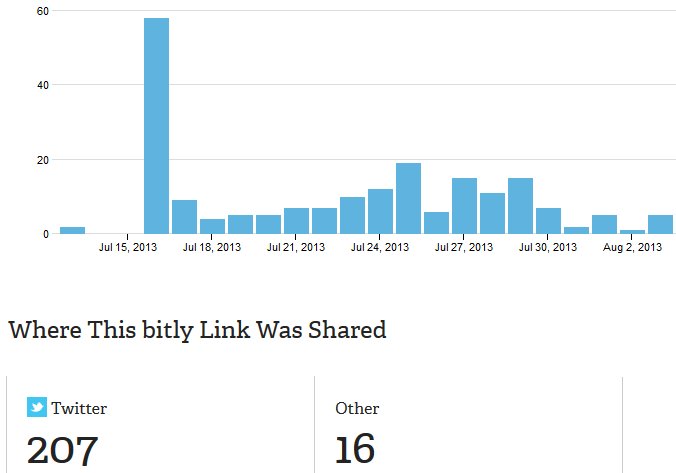 How many Twitter followers do you think you need in order to build a steady stream of traffic to your website? A thousand? Ten thousand?

Because of the dynamic nature of Twitter, the majority of tweets you post disappear in the grand void of the cyber hyperinformation abyss without a trace. According to a large-scale data analysis by Sysomos, 71% of tweets get no reaction whatsoever. Further research by Betaworks CEO John Borthwick finds that half-life of a tweet is just 4-5 minutes. Blink and you miss it!

I recently did a study looking at a sample of data from the automotive industry. For this experiment I picked 8 car brands that were represented on Twitter to an equal measure. In other words, these brands all have between 123,000 and 160,000 followers. It’s my favourite size for investigative purposes. Both accounts with a very low number of followers and super-celeb accounts tend to provide inconclusive data.

From each Twitter feed of these 8 automotive brands I picked 10 random links that pointed to resources related to the brand. For example, I ignored links that were part of retweets because if, let’s say, Mercedes retweets a tweet by Kelley Blue Book then I have no idea how many clicks were generated by KBB in the first place and how many did Merc contribute.

Where is the traffic coming from?

Special thanks for being able to find how many people click on Twitter links have to go to Bit.ly. They allow anyone to check traffic stats of any publicly available bit.ly shortlink. If a brand posts a bit.ly link, I can check how much traffic it has received from Twitter.

That’s why marketers should use bit.ly as their default url shortener. And once the link is shortened, it’s a great idea to use the same link on Facebook, Stumble and any other social networks. You can always come back and check the stats. Suddenly you can measure the effectiveness of your social media campaigns!

To accomplish this, simply add a plus sign at the end of your bit.ly link, like this:

To think that you get all this wealth of data for free is simply amazing! There are other shorteners that let you see stats (unfortunately, the native t.co is not one of them):

This table was produced during the study. It shows the number of clicks each link has achieved on Twitter.

At the end, I drew the average for each account and found what the average clicks-per-1000-followers is. So, to get 5 to 10 clickthroughs, an automotive account would need at least 10,000 followers.

This average figure will differ from industry to industry. For example, in the SEO space, it will be higher because people are more generous when it comes to checking and sharing other colleagues’ work. You will also find that there are many other factors affecting the number of clicks.

As you can see, General Motors, Volkswagen and Toyota is doing poorly in comparison with the other five competitors. Take a look at their Twitter accounts. What do you think they’re doing wrong?