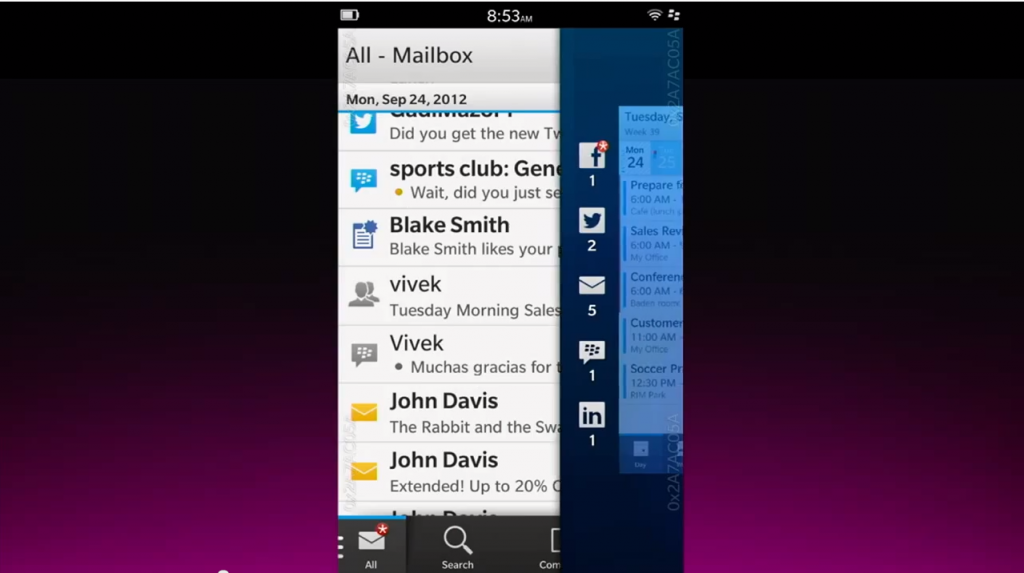 Top Things to Look Forward to in BlackBerry 10

So, the time has come. BlackBerry 10 launches today – it’s been one of the most eagerly awaited tech events of 2013 and also a make-or-brake point in the history of RIM.

The new devices based on the BlackBerry 10 OS have all the qualities for being amazing. Will they justify the buzz surrounding the launch? Only time will tell. The competition is worried – Samsung making ads mocking RIM is a telling sign! In the current situation when Apple shares (and sales) are plummeting and the Windows Phone is finding it hard to gain traction, RIM has a good chance! Let’s look at some of the main features that are bound to restore the BB back to where they belong.

They promise a smoother browsing experience. The proprietary browser is fully compatible with the new exciting HTML5 standard meaning that it will be able to effortlessly deliver rich content. As far as usability is concerned, the black title bar that currently occupies at least a tenth of my current BB Bold’s screen is going to be hidden.

The url bar has been put on a diet and it is now as thin as possible. As usual, you will be able to get back to your url bar and tabs regardless of how far down you’ve scrolled. Something that is still lacking on the iPhones.

Ever wanted to go back in time? Now you can. The unique TimeShift camera will let you flick a few frames back in time to see if you can improve the quality of your shot. Say, somebody has had a silly facial expression. TimeShift might let you fix this.

An amazing feature that will enhance the work of the 8MP camera (there’s a second one on the front panel in case you fancy some video chat). Check the video to learn more about it.

Finally BlackBerry is going developer-friendly. In fact, they will be launching with 70,000 apps in their store. That’s 35 times more than the Windows Phone made début 2 years ago.

They now have a really cool developer platform where you can choose which language you will use to develop the new app. Many developers I’ve talked to are working on BlackBerry apps based on HTML5 but there are also C++ and Java options.

BlackBerry 10 opens many exciting opportunities for the app authors putting them in control. One of the cool new features is the Active Frames that shows you what is currently going on in your phone. In many cases you will be using more than on app at the same time.

Active Frames will help you keep tabs on various processes. Don’t think of it simply as a preview – the Active Frames are dynamic – the content within the frames actually updates itself, so, if you’re waiting for that important Twitter update or BBM message, you won’t have to flick through all the apps – just take a peek at your home screen.

Surely BBM instant messaging service is one of the things that makes BlackBerry unique. Since I activated my BBM, I have hardly used SMS. If you haven’t used BBM before, it’s a great alternative to SMS that allows you to send rich content, receive a confirmation when your message is read… and meet beautiful girls by using the BBM groups which there are plenty of.

The main feature of the BBM remains, however, its high level of encryption. It’s the only mass market IM service that gives you that extra layer of privacy protection. For the new version of BBM, RIM has brought a new grid view layout and an even better integration with your Contacts app.

This is where all the communication happens. The concept is similar to what I’ve got on my Bold but many users didn’t know you could integrate your social streams into your email view. It was well hidden but now they’ve decided to spruce it up and make it very obvious. If you’re active on Twitter, Facebook and Linkedin, you really want the conversation to happen at your fingertips.

In my social media experience almost nothing is as impressive as getting a timely answer to a tweet or an Linkedin Inmail. People monitoring their emails and social streams in the real-time mode are more likely to become influencers in their field. The hub is a mix of your incoming email, BBM and social messages.

Many people don’t know this about BlackBerries but once you’ve bought one you don’t really need USB sticks, mp3 players or any other data carrier for that matter. BB is completely unrestricted. You can connect it to almost any device that has a USB output and you can freely exchange data be it music, videos or even files that the device cannot read.

Want to save a large CAD file? Sure, no problem! One of the best things about the new devices (at least for me) is that you will be able to replace memory cards on the go without switching off the phone and without dismantling it. Now the data you carry in your BlackBerry device is only limited by the number of memory cards you have!

The X10 device is expected to feature the Near-field Communication system which means that you can transfer files between two BlackBerries by doing a high-five! Some of the Android phones have had it for a while and so far it seems to be a popular feature.

Iphone is missing out and will be for the foreseeable future. It’s understandable because they have to protect their iTunes stuff, otherwise people will keep sharing mp3 files and ringtones translating into billions of “lost income”.

True to their QWERTY roots

Although the flagship device coming out first is going to be the Z10, a smooth touch-screen device, the traditionalists (like myself, for example) will get a QWERTY phone later in the spring. A QWERTY phone is a lifestyle choice for people who are typing a lot and who need to type their lot quickly. Speed-wise nothing beats an actual physical keyboard.

However, if you prefer touch-screen, the Z10 won’t disappoint. Forget about the T9 input. BB has something much more clever in place. Their predictive typing comes with an easy gesture-based interface. The suggested words appear next to the letter you’ve just typed and if the suggestion is correct, you can instantly select the word by a swiping up. Precision of typing is helped by a hi-res screen. It is going to be a 4.2” display with 1280 x 768 pixels, that’s 356 pixels per inch (iPhone has 1136×640 @ 326ppi)

Although the Z10 looks exciting, I’ll hold my breath till March and wait for the X10 QWERTY phone to come out!

Disclaimer: I won’t try to hide the fact that I’ve been a BlackBerry owner for many years and will most likely own a BlackBerry device as long as RIM exists. I wasn’t endorsed or paid to write this article.