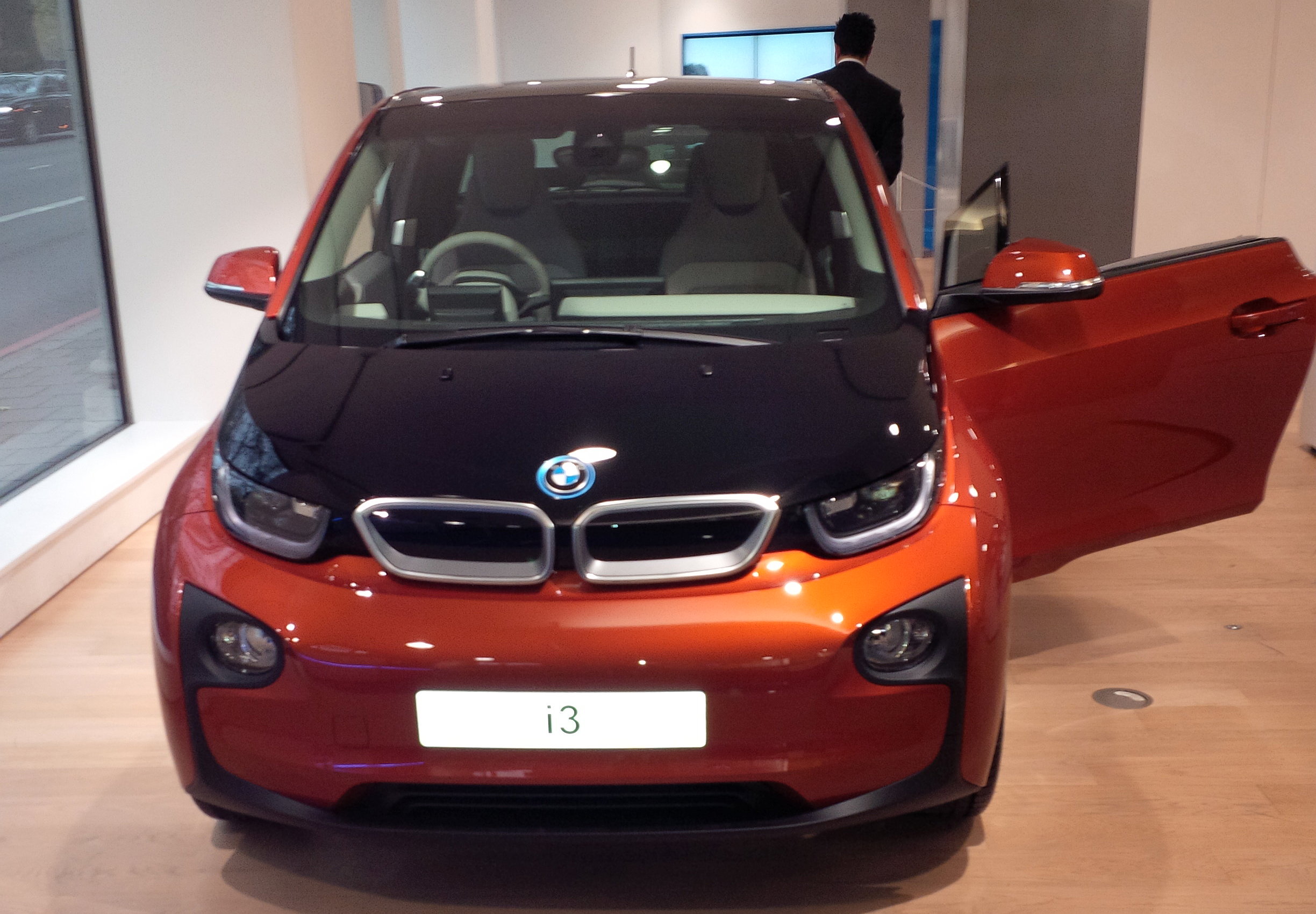 When the BMW i range concept cars were unveiled at the Frankfurt Motor Show in 2009, I thought it would be yet another one of those concepts showing off a cool green idea and never delivering when it comes to the production vehicles. And here I am – end of December 2013 – sitting in a brand new BMW i3 waiting to take it for a spin around Hyde Park and Piccadilly for a test drive. Exciting!First impressions, it’s a very comfortable 4-seater, I’d even describe it as deceptive. Judging by the wheelbase, its 101 inches puts it in the same bracket with the BMW 1 Series, which I’ve driven and found to be less than, say, 3 Series (pardon for stating the obvious). I was expecting a similar sort of sensation from the i3, so you can imagine my delight when I found I could stretch my legs. The “suicide” doors make it easier for the passengers to board. It also adds to the car’s techy image. The i3 is a handsome little vehicle and although it is rather different, it’s certainly not forcedly weird as some other green cars out there.

It’s time to put the foot down, only carefully, I’m told, because this car is supposed to be rather brisk. And so it is. Just a gentle touch on the accelerator sends the car dashing forward – swiftly and silently. If sneaking up on an unaware boy-racer and leaving him humiliated at the traffic lights were my objective, I couldn’t have picked a better car, unfortunately, I’m told there won’t be any traffic light wars today and that I’m expected to take the car for a quiet stroll around the park.

Nevertheless, I had a chance to do my 0 to 40 without piling up on the BMW Park Lane’s insurance expenses and it left me buzzing. I must admit, I’m a proponent of manual gearboxes and I don’t drive automatics unless I’m forced to, however, I really enjoyed driving the i3. You may argue that it’s not an automatic in a technical sense, and you would be right – it’s got a single-speed transmission with a fixed ratio but you handle the car the way you would any normal automatic – only with a difference that this one doesn’t make you feel like a grandpa.

Oh, and there’s something else that I find quite peculiar, and not in a negative sense. The “engine braking” is so robust that for the first couple of times I take my foot off the accelerator too abruptly, my upper body is subjected to undeniably strong G-forces. I’ll have to develop a rather subtler touch if I want this jerking to stop. If you judge it right, you can navigate London smoothly without really using the brake pedal much. Whenever decelerating, the clever brake energy regeneration system kicks in – which is good to know because I’m not a big fan of wasting energy!

A slight disappointment, I would say – is the hard suspension. Funny I should say this because I’m a chap who uses a modded Honda for his day-to-day car so I’m used to stiff suspensions and I didn’t particularly mind it, however, I know a lot of people who would possibly wish for a softer drive. Another criticism is the material used in the front panel of the basic trim. The part of me that could be considered an eco-warrior screams: “it’s good for the environment.” And I have to agree with him because indeed this fibrous panel is made of 100% recycled material. But I just really don’t like the way it looks – sue me!

Carbon Fibre for less than £100K

The last time I drove a car built of carbon fibre, it cost well over £100K and did a couple of miles per gallon (if that). Here I am faced with an affordable £33K carbon fibre car that costs just a couple of bob to “fill up.” I’m not dreaming, am I? No, obviously not. We’ve just about come to a stage when car manufacturers can afford to use technologies previously only restricted to F1 and a bunch of super-car developers.

It’s still expensive and still carbon-intensive to produce but BMW has more or less overcome the main obstacles by clever management. The raw materials are shipped in from Japan across the Pacific to a specialised factory in Washington, where electricity produced is much greener and much cheaper than what you get in Germany.

The pre-made carbon fibre is then shipped to Germany where the cars are assembled. This may sound like a lot of “foodmiles,” however, they use 70% less water and 50% less energy to build the car. Also they use recycled materials where possible (see my fibre rant earlier in the article) and the car itself when it comes to an end of its active service, is up to 95% recyclable.

You may ask why you would want to use F1 materials to make a compact city car. Well, firstly it helps offset the carbon-intensive processes related to manufacturing electric cars (especially sourcing the lithium). Secondly, it helps with the range – or should I say – lets them install a smaller pack of batteries. Speaking of which, there are 8 modules of batteries. This is another cost saving measure. Although the batteries have a 100,000 mile or 8 year warranty whichever comes first, the batteries can develop a fault, or become less efficient by the time they reach 8 years of age.

But the peculiarity is that the whole battery rarely goes kaput. It’s usually just one section. If your car battery is hidden inside a monoshell, you just ditch the car and forget about it. In the case of BMW i3, you just replace the faulty module and drive on. Well, not literally. You can’t replace the module because the guys at BMW have made this car completely idiot-proof. In other words, forget about the DIY – everything is sealed off and you just can’t intervene no matter how much you fancy having a go at repairing your electric car! Knowing how “good” my own electrical skills are, I can’t say I blame them.

The car costs from £25,680 after the Government grant. It comes in two versions – an electric car and a range-extended plugin vehicle. The latter version will add around £3,000 to the sale price but you get a small gasoline engine on board that will generate electricity should you ever happen to have run out of “juice.” As far as the range is considered, you get your standard 80 miles per charge. It is claimed that the range can be boosted by up to 20% if the car is driven in the eco mode. I will admit I didn’t try the eco mode because I just wanted to enjoy that acceleration! Vroom! (Ignore me, there was no vroom – the car is as silent as a mouse!)

When it comes to recharging the car, it makes more sense to do so overnight at your property. With the average UK energy prices, this will cost you £2 during the off-peak tariff and £4 during the day. Alternatively, you can invest £315 in a specially-designed 32AMP Wallbox fast-charger. It won’t give you more miles but it will do the job much quicker.

Last time you could fill up a car for a deuce was back in 1972 only then your deuce was worth more like 30 quid in spending power. When you count in the 0-road tax and the congestion charge waiver, motoring doesn’t get cheaper than this!

To finish it off, watch a video I took just before the test drive. It shows the BMW i3’s fibre body in its full glory!