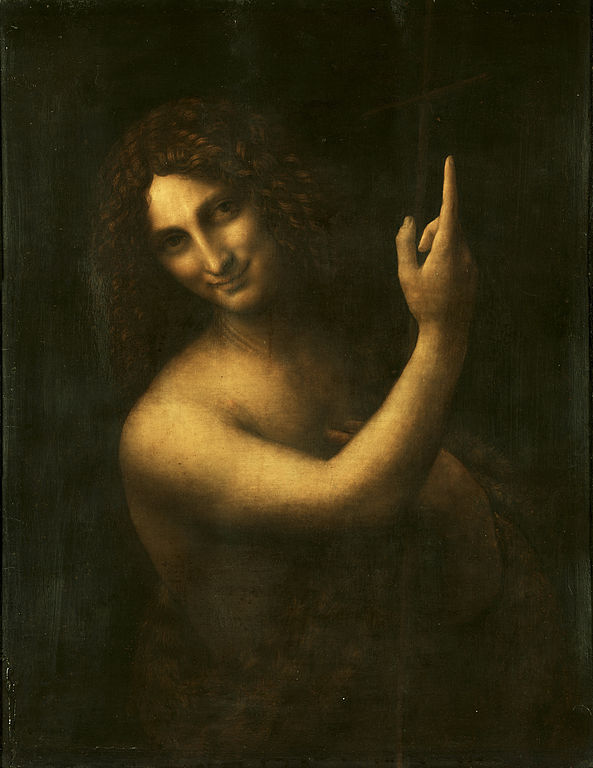 Mona Lisa is not the Man We Think He is

Is speculation about the origins of the painting of Mona Lisa still permitted by law? Good, then I can go on and add to the effort of expanding the collection of conspiracy theories entwining the perso​nality of the great Leonardo da Vinci.

We enjoyed a relatively peaceful spell after the splash created by Dan Brown’s da Vinci Code had subsided. But then someone dug out the Isleworth Mona. After gathering dust in vaults of a Swiss bank for 4 decades, the painting was unveiled late 2012, opening the floodgates of new conspiracy theories.

The Isleworth Mona Lisa, originally discovered in a home of a Somerset nobleman, was believed to be a hoax staged by it’s owner Henry F. Pulitzer (not the Pulitzer who established the prize) but at the same time there are quite a few people believing that the Isleworth Mona Lisa is an original work by Leonardo and depicts a younger version of Lisa del Giocondo – the presumed subject of the timeless painting.

Yet, there are more questions than answers!

The rumour of da Vinci  being a member of various secret organisations is surely just a fabrication. Or is it? Leonardo was a young man of 19 years when the sacred text of Corpus Hermeticum was translated from Greek and published in 1471. Eventually it becomes a pivotal point in revival of Hermeticism.

Where was Leonardo at this time? At the Verrocchio’s workshop in Florence. It is highly probable that young Leonardo was heavily influenced by Marsilio Ficino – an early Renaissance philosopher, founder of the Platonic Academy and the man behind the translation of Corpus Hermeticum.

Ficino was one of the most famous and best connected Florentines of that time. In fact, he was a talented networker – he knew everyone and everything that was somehow related to the culture life of Florence.

As we all know, Hermes (AKA Mercury) has a dual character and… well, he is androgynous, a unity of the masculine and feminine. Looking at Leonardo’s creative efforts it seems that androgyny fascinated him.

And you cannot really assert that masculine women was his style. If you look for example at The Madonna of the Carnation painted in 1478 – it’s a typical woman, and also there’s not much in the way of enigma. It seems that he turned towards a more symbolic painting around the turn of the century.

The Last Supper painted in 1498 shows what the mainstream art critics believe to be Apostle John on the right from Christ. Now there are only two ways you can go about this painting – either you agree with the conspiracy theorists that the person on his right is Maria Magdalena – the bride of Christ or – if you insist that this is indeed John – he is depicted in a very feminine way.

The Madonna of the Yarnwinder of 1499 gives us even more food for thought. Ok, the face is feminine but look at the palms of his (pardon, her) hands. They’re huge and they’re manly.

The painting is full of hidden symbolism. For many historians it epitomises one of the main principles of Hermeticism – As Above (the yarnwinder pointing to the sky) So Below (the gesture of a Mage pointing towards the ground).

John the Baptist painted around 1513 as a single figure was another Leonardo’s androgyne with an enigmatic smile. He’s so very different from the depictions of John the Baptist by other prominent artists.

For example, I’ve grown up with the image of John the Baptist from Alexander Ivanov’s The Appearance of Christ to the People – a tall, masculine, suntanned person. What does your John look like? We’ll never know what he really looked like but the question is – why did Leonardo da Vinci decide to paint John the Baptist like that?

Talking about Mona Lisa – a painting that appears on the timeline between the Yarnwinder and John the Baptist – you can’t really call Lisa (if that was his/her) name a very feminine person. Take away the hair and you can imagine him being a male.

So, what was I saying about the mirrors? Ah, glad you reminded me. It’s about the eyes. Try to print out the picture and stick it to the wall. Then walk around the room and observe the painting with your peripheral vision (don’t stare at it but keep it in the corner of your eye).

You will soon notice that Mona is following you with her piercing gaze. There’s a very simple explanation to this – the image may have been painted as a self-portrait using a mirror. You get the same strange effect if you put a mirror on the wall. Your image seems to be staring back at you.

So, who is depicted in the famous painting and what message did the artist want to convey? The speculations will never end but it is highly unlikely that it’s Lisa del Giocondo. Leonardo allegedly spent 3 or 4 years painting and repainting the small picture and then he never parted with the painting till his dying day.

It’s not exactly what you do with a commissioned work. Otherwise you’d have one very unhappy client. Another theory goes that the Isleworth Mona Lisa is the actual commissioned work that he finished in early 16th century while the version that we all love and admire took him further 11 years before it was finished in 1517.

Hey, you’ve got the wrong picture

Why do we think it’s Lisa del Giocondo in the first place? We go by what Giorgio Vasari wrote some 30 years after the death of Leonardo. Another piece of evidence is a short note scribbled by Agostino Vespuccio on on a margin of a page apparently mentioning that the maestro has painted a portrait of Lisa del Giocondo.

However, you cannot really link that note to the painting of Mona Lisa because Leonardo was painting a dozen other portrait commissions in the early 1500s. So it may well be that he indeed painted a portrait of one Lisa del Giocondo at a certain point but you cannot prove that Mona Lisa is the painting in question. The majority of Leonardo’s work has simply perished leaving us guessing.

Besides, the note is not very clear. It’s made next to Cicero’s text about a sculptor Apelles, who worked hard to complete the head of his Venus while leaving the rest of her body in the rough. Then Vespuccio goes and compares da Vinci with this Apelles chap saying that da Vinci completes all his paintings in a similar manner, including that of a head of del Giocondo.

But wait a minute!!! Would you call Mona Lisa a headshot? It’s a half-length portrait. And you cannot really say that the head of Mona Lisa has received more technical attention than the rest of the painting. The whole picture is quite homogeneous with arms and background well-detailed and with a rather elaborated drapery.

The scribble is also not very clear. It reads “… capitis del gio condo…” Unfortunately, the well-schooled Vaspuccio didn’t bother with capital letters (he even spelt vinci with a lower-case v) so we cannot be sure if gio condo is actually a surname especially as “gio condo” has been subjected to a word division. Or maybe not! Maybe it is two words! If you just grab the Latin out of the context and translate it, “capitis del gio condo” loosely means “head of the omen house”… another Hermetic message?

And now for the cat among the pigeons – the note was made in 1503. How could Vespuccio know what the portrait of Mona Lisa would look like 3 years before its completion?

Must’ve been dead by now

There is more that goes against this theory. The real Lisa del Giocondo died when she was 72 – a serious age for Renaissance when you were considered lucky if you reached your 50 anniversary. Could a woman looking so ill in her early 20s live to be 72? Unlikely!

Can it really be that Leonardo painted himself as part of a Hermetic message? If you reverse the most well-known self-portrait of Leonardo and align it with Mona Lisa, the features come together nicely. And then what’s with the hair? Lisa seems to have very little hair for a flourishing 24 y.o. woman.

In the meantime, 50 year old Leonardo would have been turning increasingly bald. Many amateur and professional historians seem to believe that this indeed is a self-portrait, with Beachcomber apparently being one of them.

As far as alternative theories go, my personal favourite is one that I found on Jay Meattle’s blog. It half-jokingly claims that Mona Lisa is a portrait of Leonardo’s illegitimate daughter. That would explain why he was so protective of the painting.

And if (for a short moment) we pretend that we believe that the Isleworth painting is a work by Leonardo – it would explain this theory perfectly. He painted his daughter twice. Unfortunately, there is no evidence to support this theory. And furthermore, there is no evidence that da Vinci has ever had relationship with anyone – after all Plato has always been Leonardo’s hero (another connection to Hermeticism?)

Anyhow, there are people who believe that there’s more enigma in the background than there is on the foreground.

Bridge is an important symbol in both Hermeticism and Freemasonry. I wouldn’t exaggerate if I said Leonardo inspired the movement of Freemasonry. He was a great architect, thinker and an enlightened person – essentially a role model for a Freemason.

Then you have an unnaturally winding road on the left from the figure of Mona Lisa. If you use a mirror, it will turn into a capital S… or maybe a snake… Again, snake is one of the main symbols of Hermeticism – Hermes is often depicted carrying a caduceus, a symbol of wisdom and medicine.

To top it all off, we have this pyramidal figure in the foreground with the all-seeing eye. A motif often used in mystic books.

In the meantime, Donato Pezzutto has found a more down to earth (no pun intended) explanation to the background of Mona Lisa.

He’s cut the painting in halves, stick one end to the first half and found something resembling a map of Val di Chiana in Tuscany.

Can it be a co-incidence? Why would anyone try to hide a map of rural Tuscany behind a portrait?

Unless it’s a map pointing to hidden treasure… Oh, let’s not go there. Forgive me, dear Tuscans if I’ve unintentionally sent an army of treasure-seekers to dig up your beautiful countryside.

So, I’ve got carried away and it’s getting really late. What do you think? What did Leonardo try to say with this painting?