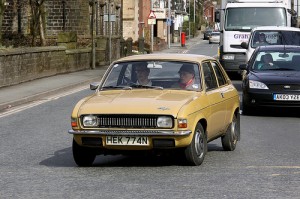 Top 10 List of Famous Cars in British TV and Cinema

It’s time for another biased top list. Film cars often receive a cult status… in fact, even a rubbish car can become a star as you’ll see scrolling through the top 10 famous cars on British TV and Films.

http://www.youtube.com/watch?v=8H5_xt8ZOzk
Relatives arriving in a dilapidated Ford Cortina? It’s about as embarrassing as it gets, especially if you’re a snob trying to keep up appearances. If you’ve seen the amazing 90’s comedy Keeping up Appearances, you must remember Onslow – Hyacinth’s lower-class brother-in-law. His backfiring Ford Cortina Mk IV went to become a synonym of a dodgy car, although very few know that 1,1 million Cortinas were sold in just 6 years.

Ford Cortina gets another entry in the top 10 Famous Cars on British TV. It’s the Mk III from Life on Mars. Looking more graceful than Onslow’s banger it was still considered an unfashionable car in the 70s. Today, mainly thanks to the show, old Fords are back in the limelight.

It gets from bad to worse. Not another banger! Yes, officially one of the worst cars ever made in Britain rose to the fame thanks to the Dawn French’s classic murder saga.

The car was an accomplice to several murder cases and it was perfect for the film.

And you couldn’t imagine the murderess driving anything else than an Allegro.

pic by Ingy The Wingy (not the actual car, Dawn French wouldn’t let me near her Austin)

The Austin A35 is one of the most popular British compact cars of all time… although before 2005 you didn’t think about it in terms of a cult car. Yet it became one thanks to the lovely plasticine movie series of Wallace & Gromit by Aardman Studios. The jolly pair is using a 1964 A35 van carrying a 1953 tax disk with the registration HOP 2 1T as their delivery vehicle.

When starting to shoot the Inspector Morse series they almost made a big mistake. The original script places Morse in a Lancia. Lucky there are real English gentlemen like John Thaw (title role). He insisted on driving a British car. The Jaguar Mk II is a truly beautiful car even with steel wheels and Everflex roof. The car used in the series was recently sold for £100,000.

The super-cool gangster film features several interesting cars like Cobra and a weird white Renault Traffic van but it is the Rover P5 driven by Eddie that stands out. With a history spanning 15 years, Rover P5 was the ultimate executive car of the 60s also attracting non-conformist people, artists, gangsters… and it still does even 5 decades on. (not the actual car on the video)

If we ever decide to compile a list of the Best cars being whipped with a tree-branch by a tall neurotic man, the Austin 1100 would definitely come on top. The red car – as awkward as its owner – is one of the most memorable four-wheeled actors in British TV.

The Reliant gets two entries for appearing in two classic comedies. Although usually mocked on TV, the car was recently announced the safest car in Britain. That’s according to the insurers – they’ve calculated that Reliant owners are extremely unlikely to claim. Despite the dodgy look, the car is exactly what it says on the tin – reliant.

http://www.youtube.com/watch?v=Zavsd6etz_Q
Wherever you appear in a green Mini with a black hood, you get smiles. The car is as recognised as probably is the Bond car but we have to take the engine size in consideration, hence the 2nd position.

The DB5 is a star in its own right but there’s no denying in the fact that it was James Bond who propelled the British sports car to a global stardom. Although Ian Fleming had the older DBIII intended as the ultimate spy vehicle, by the time the production of ‘Goldfinger’ was at full swing, the DB5 was the most recent creation of Aston Martin and putting Bond in an old car didn’t seem like a good option. The original DB5 prototype was used as the Bond car with another standard vehicle for stunts.

Is there something that you’d like to add to the Top 10? If so, please use the comment form below.