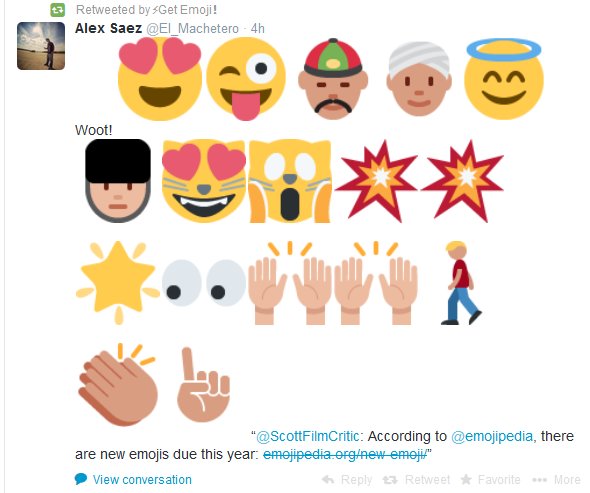 If you’re wondering how some geeky tweeps are managing to add colourful inline smileys to their tweets, it’s Emoji. Smartphone users have been enjoying the Emoji smileys for quite some time. Twitter recently announced extended support for desktop devices. Here’s how you can join the fun:

You’d have to switch to Chrome to be able to use Emojis. Here’s a plugin that will open the door to the magic world of Emoji. Where is a Firefox add-on? Anybody?

You can download a free app for your desktop Mac here. When on Twitter, pressing Comm+Ctrl+Space will bring up a smiley keyboard.

How to use Emoji on Android? If you’re looking for a convenient Emoji keyboard, you can find it here.

If you are looking to “using some social contacting apps” on your iPhone and you don’t mind horribly-written app descriptions, you can download Emoji from iTunes.

What was I thinking? I managed to find two free apps on BlackBerry World to try Emojis on my Blackberry but it didn’t really work. The descriptions obviously written by the same person who “killed” the iTunes blurb. One of the apps didn’t work at all, the other one did work with BBM and although there was an option to share emoticons via Twitter, it didn’t work. I keep telling myself that I didn’t choose my 3rd BlackBerry in a row for the abundance of apps. However, most BB users are keen twitterers and it would make sense to publish at least a couple of useful socmed apps on BB World. Rant over.

If you’re not using any of the aforementioned devices but still want to express yourself emotionally, or should I say emoticonially, you can use UTF8 characters in your favourite text processor and then copy/paste to Twitter. For example, hold the left ALT and type 9834 and you’ll get this one: ♪. Useful, I know. What’s even more useful is that you can open a visual table of available UTF8 characters in Microsoft Word by going to Insert -> Symbol. You can find all sorts of goodies there, like this VHS tape: